I received a copy of Mackenzie Lee’s Loki via @lexasaurusdoom for an honest review, with emphasis on the genderqueer rep.

Most Marvel movies start with a small yet intense battle that seemingly has nothing to do with the main plot until later on. This book follows the same structure, but instead of an intense battle we get a diplomatic mission. The Norn Stones have been stolen from Asgard, and It’s Thor and Loki’s job to enlist the help of the Ice Elves.

This doesn’t even start until after after a feast and prophecy. That bloody prophecy only cemented what always was.

All of it becomes relevant later on, but it made the first third of the book drag. I became invested once Loki was on Midgard and met Theo Bell. Bell and the SHARP society asked help from Asgard because of a plague of “living dead”- corpses that have no reason to be dead and don’t grow cold.

Loki is a pansexual genderfluid. Those exact words are not used in the book- he says he can be male or female, and there’s a male and female love interest. There are more subtle moments, when he wishes he could wear nail polish and high heels without attracting attention. But those aren’t fluid exclusive, or even queer exclusive.

I did kinda want to see what would happen if a human saw his black nails. They are quite fabulous but I can’t risk human attention.

Theo Bell is gay and has a permanent limp. He might be my favorite character, above Loki. But I don’t feel like he was explored as much as he could’ve been. We know a little bit about his past, he comes off as somewhat meek but can stand his ground. I love how he found a safe space for himself in the SHARP society. 19th century London does not tolerate being gay, but he found a place that’s homophobia-free. Bell? He’s such a human and I am definitely not fond of him.

Amora *sigh* I liked her at the beginning, when she was just Loki’s witchy best friend and crush. She was defiant of authority and found ways to prank her teacher. But there was one moment where it all came crashing down. A human questioned her use of magic, and she was immediately triggered.  This could not have been the first time it happened, and she should’ve been able to handle it without Loki there. I get it, she doesn’t care what people think, she doesn’t care about humans, but she’s more creative than an outburst. Amora is so enchanting.

The first third wouldn’t have dragged as much as it did if there was a little more detail and depth. What’s it like in the halls? What was the food like? But most of it was backstory.

Then we get to the Elves, and it’s ugh, Thor is so uncivilized.

The writing doesn’t change, the improvement is dependent on the introduction of the main plot. The corpses, the magic, and  the human interaction are all written about briefly and the reader is sparred all detail.

It’s not necessarily bad, it’s just not immersive. I deserve to be written about with the greatest of skill.

There was one scene, when Loki first visits the Enchantress, that’s so real that it feels out of place in the book. There’s black everywhere, and darkness. The Enchantress is covered in a black veil that parts only for a glimpse into her eyes. The table she does her magic on is explained all right- it’s a little confusing but you get the idea.

The other places, SHARP headquarters, Bell’s apartment, etc. aren’t as vividly described, but they’re still described in a way you can picture them. Doesn’t mean they’re places fit for a prince. 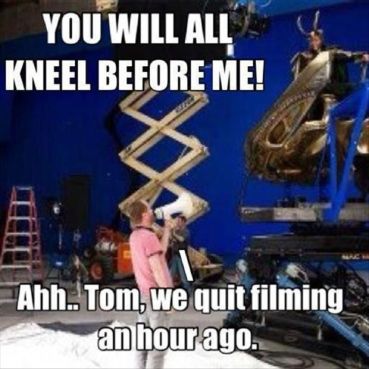 7/12, average, don’t recommend because there are better books out there. There’s got to be better fluid rep, and I will find them. This book had potential, but Mackenzie Lee wasn’t the person to write it. I’d love to see a genderfluid author take on Loki because there are realities to being genderqueer that a cis author would have a lot of trouble to describe. Cis authors should have genderqueer side characters but leave the protagonists to the queer. PLEASE.

Not that anyone is capable of expressing my true majesty.

Support this blog on Ko-fi

3 thoughts on “Loki: Where Mischief Lies”